How to be a Guest Entertainer by Royal Caribbean’s Director of Entertainment, Ken Rush 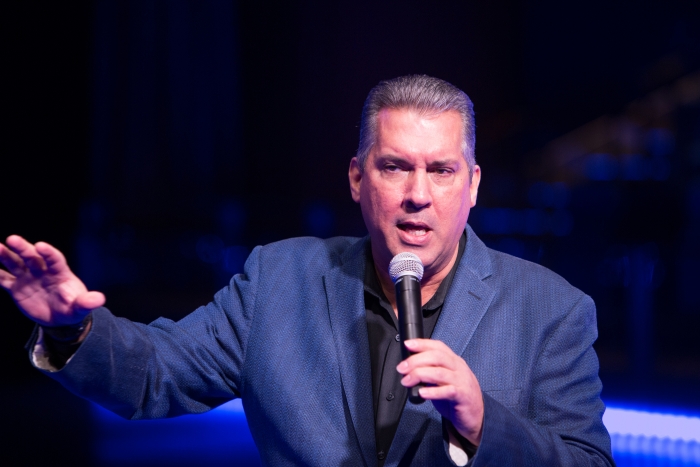 Ken Rush has worked in the cruise industry for over 32 years, starting as a DJ, then worked his way up from cruise staff, shore excursions, and stage and production. After only four years with Royal Caribbean he became one of the company’s youngest cruise directors. He was part of the “elite” take out team – introducing the latest ships like the Quantum of the Seas, the Oasis, the Allure and most recently the Harmony of the Seas. Now he has moved from sea to land as Royal Caribbean’s Director of Entertainment and Guest Activities. If anyone knows what makes a great cruise ship act, it’s Ken Rush.

He tells me the kinds of acts that work best on ships. He says you should, “Make them fall in love with you as quickly as possible when they come on the stage”. As in any kind of cabaret the chat, what you say in between the songs, is very important. Ken says, “Anyone can go up on stage for an hour but that can become very boring. Include the crowd, talk to them and get them invested in the show.”

WHAT IF THEY DON’T UNDERSTAND ENGLISH?

Be prepared to change your act to suit your audience. You’ll often be presented with an international audience where English isn’t the main language. Ken advises acts to cut back on some of the talking and include songs that everyone will know. If there are a lot of Spanish speakers on the ship sing something just for them. They will love you for it. Try choose a song that is also known by people from other countries too, so no one feels left out.

Yes. All Cruise Directors are different, but for Ken Rush, a show of around 45-55 minutes is ideal. Any longer and you can mess up the “flow” of the ship. That’s the system that carefully anticipates where and when the guests will move around the ship. If you run long you might stop guests spending money in a bar or the casino.

WHAT ABOUT MIXING WITH THE GUESTS AFTER YOUR SHOW?

Some cruise lines are really keen for entertainers to mix with the guests. Some even ask you to host tables in the dining room. Ken doesn’t really mind either way. If you’re happy to hang out with guests he says, “it’s an added bonus” so go for it. If you’ll rather keep a low profile it’s fine. If you’re selling CDs after your show, that’s a great opportunity for guests to meet you, take a photo and connect with you. Many Royal contracts are what we call “fly-ons” – you get there, do the show and leave the next day, so you’re hardly on the ship. Other lines will have you there for a whole week so there is much more opportunity to mix with the guests.

Most Royal ships now how large digital screens outside the theatre where they’ll advertise your show. Give the ship a recent, great quality, high definition photo JPG and good billing – that’s a short phrase that gives everyone an idea of what they can expect from your show.

I use: “Star of the West End’s ‘Rat Pack’ sings the hits of Frank Sinatra, Frankie Valli and Luis Miguel” which sounds a lot better than plain, “Male  vocalist”.

On larger ships there is so much going on and a lot of it at the same time. Guest have choices. You may well be up against an ice-show, a 3D movie and a buffet! You have to entice people to your show. Use a billing that makes them want to come see you. Though if you find billing that sounds more attractive than “free chocolate lovers’ buffet” please tell me.

Usually the Cruise Director will introduce you on stage. They like doing this. It’s their chance to get some face time in front of the guests and make an impression. It’s also nice for the act to have someone warming the audience up for them. Some acts use video to open their show and prefer not to have the Cruise Director on first. This is called a cold start. If you really want a cold start most CDs will let you but they might not like it. My advise is to give them the choice. If they really want to introduce you, don’t make a fuss. It’s not all about you. They may have some important information to pass onto the guests, so be cool.

SHOULD YOU TRY MAKE FRIENDS WITH THE CRUISE DIRECTOR?

Every Cruise Director is different, but Ken does like his acts to make contact once they get on the ship. Find their office, stop by and say a quick hello and let them know you’re here and everything is good. Just touch base. Respect how busy they are and don’t be offended if they don’t have time to hang out.

For Royal Caribbean your immediate boss on the ship will be the Stage and Production Manager so for technical issues you should liaise with them. Try not to be high maintenance. To you, your show is the only thing that matters but you’re working with pros who do this week in and week out. Everyone is busy. Be prepared, give the Stage Manager a list of requirements ahead of time like how you like the stage laid out, if your show is on click-track, what lighting you need etc. Make sure everyone knows what you need in advance and then trust they will get it done for you.

HOW DO RATINGS WORK?

You will be rated by the guests and the Cruise Director. For Royal you will not be listed by name on the guest questionnaire. Guests rate entertainment in general and make comments about specific shows if they want. The Cruise Director will usually watch your show and write his comments in a report. They can also give acts a rating between 1 and 4 (low to high).

If you’re performing on a tough night and the crowd is hard, don’t worry. The Cruise Director will take this into consideration. Maybe the weather’s been awful, the ship has missed a great port or everyone is tired out from tours and goes to bed early. Don’t worry. They get it. Do your best and it will be appreciated.

Not really. Some audiences are more demonstrative than others. Americans are more likely to stand up than British (actually, everyone is more likely to stand up than Brits) and it has little bearing on how good you are. Some acts get obsessed with standing ovations and love to tell people on Facebook whenever they get one. Boring. Whether they stand or not, you know if you’ve done a good job or not and so does the Cruise Director. There’s a funny podcast here on standing ovations with comedian Allan Stewart and another one here that’s a bit more serious.